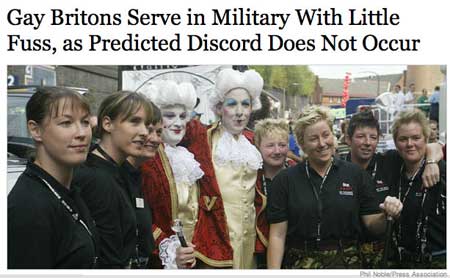 John Aravosis at AmericaBlog appropriately takes the NYT to task for accompanying a forward-looking article on gays in the military with a photo that seems to reinforce plenty of stereotypes. Says Aravosis: “I wonder how many straight people who find themselves in the middle on gay issues, or even those slightly (or majorly) predisposed against us (especially on the gay-ban), will have their subtle prejudices reinforced by a photo that pretty much makes gay people look like effete fools. Because, you know, nudge nudge wink wink, the women are butch and everything, so maybe they’re okay in the military, but the guys are all men who just yearn to put up on women’s make-up and wigs – hardly the manly men you’d want fighting the terrorists, let alone sleeping in the cot next to you.”

The article reports: “Since the British military began allowing homosexuals to serve in the armed forces in 2000, none of its fears — about harassment, discord, blackmail, bullying or an erosion of unit cohesion or military effectiveness — have come to pass, according to the Ministry of Defense, current and former members of the services and academics specializing in the military. The biggest news about the policy, they say, is that there is no news. It has for the most part become a nonissue.”

And perhaps a hopeful note for the future, according to one British official: “We’re not looking to have quotes taken out of context in a way to imply that we’re trying to influence the debate in the United States. There are some sensitivities over the timing of this. We have had communications from our counterparts in the United States, and they have asked us questions about how we’ve handled it and how it’s gone on the ground. There does seem to be some debate going on over how long the current policy will be sustainable.”

Gay Britons Serve in Military With Little Fuss, as Predicted Discord Does Not Occur [nyt]
US military talking to Brits about how long gay-ban should be continued [americablog]