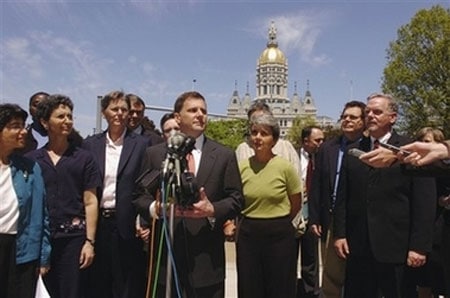 Eight same-sex couples who were in Connecticut Supreme Court yesterday to argue that civil unions and their separate-but-equal status do not measure up to marriage walked away from the hearings “hopeful” about what might come of them, according to the Hartford Courant. 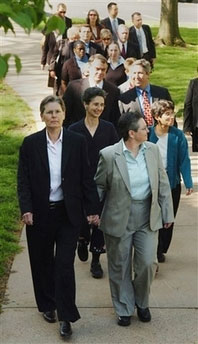 Said Rosenberg: “We’re talking about a word here. It was rational for the legislature to preserve the opposite sex definition of marriage, which has existed throughout history and which continues to represent the common understanding of marriage in most other countries and states in our union.”

According to the Hartford Courant, “Rosenberg argued that same-gender couples are far from politically powerless, and have made ‘significant advances’ in recent years, noting the passage in Connecticut two years ago of the first civil union law in the country that was not compelled by a court order. She said she wouldn’t be surprised if sexual orientation was soon grafted onto the constitution’s equal protection provisions. ‘Is that your argument – give them more time and they’ll do better?’ Justice Richard N. Palmer queried. ‘For many years, gays and lesbians have been subjected to significant discrimination.’ Justice Flemming L. Norcott Jr. drew laughter when he interjected, ‘If they were doing better, they would have passed that bill across the street.'”

Norcott was referring to a bill that would make gay marriage legal in the state which in April passed the Connecticut General Assembly Judiciary Committee by a surprise vote of 27-15. The bill has headed to Connecticut’s house but a vote won’t be made on it this session.

Argued Klein for the plaintiffs: “Here the lesbian and gay couples have been relegated to a less prestigious, less advantageous, institution…Depriving same-sex couples of the word marriage is a way of depriving them of equality as couples and families. Marriage is not just a bundle of legal rights. It is a status that the state confers on people, and it’s a status that has with it profound personal meaning to individuals.”

According to attorneys, the Connecticut justices may issue their decision by November.