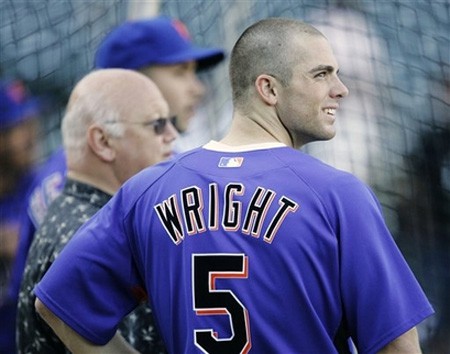 Most of the New York Mets had their turn at the clippers on Tuesday. After David Wright showed up at the clubhouse having done it himself, Carlos Beltran decided the whole team should take the plunge.

Wright said his decision to go under the clippers was not a nod to superstition: “It has nothing to do with what’s happening on the field. I wanted to change it up a little bit. It’s getting hot outside. It was nice this morning. Didn’t need any gel.”

Added Wright: “I don’t think it was any one guy’s idea. Just as a team, we thought about it, got clippers and started doing it. We’re trying to get everyone to do it.”

Following their barber break, the Mets beat the Giants 4-1.

Previous Post: « David Beckham Spent the Night with a Pair of Clippers
Next Post: New Jersey Students Stage Walkout in Support of Teacher »