Time is definitely on the side of gay marriage in New York, reports the New York Post, according to a new poll which reveals that most of the opposition to same-sex nuptials comes from those 55 and over: 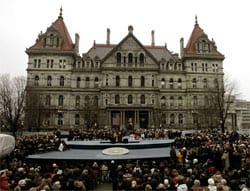 “The Siena College survey of 620 registered voters found a plurality of New Yorkers – 47-43 percent – still oppose legalizing gay marriage but only because a relatively large number of voters 55 and older says they oppose the plan. While 51 percent of those over 55 were against gay marriage, 51 percent of those between the ages of 35-54 were in favor. And by a sizable 63-29 percent, voters between 18 and 34 years of age said they approved gay nuptials as well. It was the first time the Siena College survey had asked a gay marriage question, so there were no past results for comparison. A Quinnipiac University poll in 2004 found 55 percent of New Yorkers opposed gay marriage while 37 percent were in favor.”

Legislators are currently considering a bill introduced by Governor Eliot Spitzer that would make gay marriage legal in the state. In early May, thousands turned out in Albany in support of the bill.