New study cites “alarming” rate of unsafe sex among gay HIV-positive British men: “Thirty-seven percent of HIV-positive men said they had had unprotected sex with more than one partner in the past year, while the rate among HIV-negative men was 18 percent.” 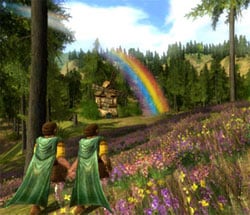 The Lord of the Rings: Online cuts marriage feature altogether after makers couldn’t agree on gay marriage: “The game has been in beta (a test version) since September, and during discussions of new features for the game, which was officially released Tuesday, the design team wound up in a heated discussion over what restrictions should be placed on marriage. They debated not only gay marriage but also marriage between members of different species. Finally, the game’s executive producer settled the matter by pulling the entire marriage feature.”

Lead singer of thrash metal band The Haunted gets a massage at a gay bathhouse and lives to write about it.

Microsoft’s Steve Ballmer says Apple’s iPhone has no chance of capturing market share: “No chance. It’s a $500 subsidized item. They may make a lot of money. But if you actually take a look at the 1.3 billion phones that get sold, I’d prefer to have our software in 60% or 70% or 80% of them, than I would to have 2% or 3%, which is what Apple might get. In the case of music, Apple got out early. They were the first to really recognize that you couldn’t just think about the device and all the pieces separately. Bravo. Credit that to Steve (Jobs) and Apple. They did a nice job. But it’s not like we’re at the end of the line of innovation that’s going to come in the way people listen to music, watch videos, etc. I’ll bet our ads will be less edgy. But my 85-year-old uncle probably will never own an iPod, and I hope we’ll get him to own a Zune.”

Thomas Dekker responds to the controversy surrounding Heroes ‘gay’ character Zach following disclosures by executive producer Bryan Fuller that the character was axed because Dekker’s manager thought his playing a gay teen might affect future casting. Dekker: “I would like it to be known by everyone, that I have played a gay character three times before in my career, one when I was twelve (which is on youtube), one when I was fifteen, and another when I was seventeen. I, nor my management have ever had any kind of problem with creating a gay character…What transpired on heroes is something far more complicated than anyone being “afraid” to make Zach homosexual.” More… 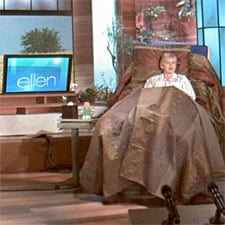 Her back in pain, Ellen DeGeneres to broadcast from bed.

Report: Social networking site Facebook shuts down Arab LBTG group due to pressure from governments of Saudi Arabia, Egypt, and others. “The governments of Saudi Arabia, Egypt and other Arab regimes have complained to Facebook about the group “Arab LBTG” (Lesbian, Bisexual, Transgender, Gay) saying it goes against Islamic code of conduct. They threatened to ban Facebook if their countries’ users still had access to it. After Facebook received the complaints, they contacted the group’s owner and demanded that the group be closed. After the owner refused, Facebook then closed the group themselves.” [UPDATE: ‘Tis apparently a hoax. Thanks, commenters]