The Chief Executive of oil giant British Petroleum (BP), Lord Browne, has resigned from his position after losing a four month legal battle to prevent the media from publishing details about his private life which included revelations that he had a four year gay affair with a Candaian named Jeff Chevalier, and that he had given an “untruthful account” of how they met. 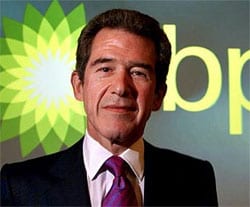 Said Browne: “For the past 41 years of my career at BP I have kept my private life separate from my business life. I have always regarded my sexuality as a personal matter, to be kept private. It is a matter of personal disappointment that a newspaper group has now decided that allegations about my personal life should be made public.”

Browne had been planning to resign at the end of July, and his decision to step down immediately will cost him dearly, according to MSNBC: “The company said Browne’s decision to resign immediately meant he would lose a bonus of up to 1.3 times his annual salary, worth in total over 3.5 million pounds ($6.9 million). He would also forgo inclusion in the long-term performance share plan for 2007-2009 with a maximum potential value of some 12 million pounds ($23.9 million).”

According to Pink News, “Lord Browne, 59, met Mr Chevalier in 2002, and over the next four years provided him with a life of luxury, including paying for his accommodation, clothing and extensive international travel. The peer also paid substantial sums of money to Mr Chevalier, and paid for a university course so that he could stay in the UK. The High Court had previously ruled in a private sitting that as Lord Browne had taken his partner to various social events, including those connected with his duties at BP, the relationship was widely known about. Lord Browne was one of the highest paid executives in the UK. In 2004 he earned over £5m. He was knighted in 1998 and created Baron Browne of Madingley in 2001.”