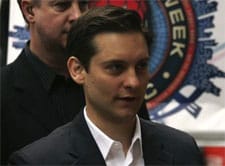 Tobey Maguire’s mom on her son’s friendship with Leonardo DiCaprio: “I figured this subject would come up sooner or later . . . Those two are just free-spirited guys. Most of the friends they hang around with are gay. They’re comfortable with that. But I think Leo and Tobey are the crossover between men and women. They have feminine traits they are willing to accept. They aren’t ashamed to have any sort of title, even if that means someone calling them gay.”

Jason West, who performed public ceremonies for two dozen same-sex marriages in 2004, lost his re-election bid yesterday: “Mr. West was defeated by a village trustee, Terry Dungan, in a 514-to-379 vote, according to unofficial results announced shortly after the polls closed. Mr. West had been charged with 24 misdemeanor counts of violating the state’s domestic relations law when he performed public marriage ceremonies for two dozen gay and lesbian couples in February 2004. The Ulster County district attorney later dropped the charges, saying that a trial would be needless and divisive.”

Barbra Streisand to charge $1,000 per ticket in UK show.

Philippe Starck lays his hands on a New York luxury condominium: Gramercy by Starck. “As we gazed at Philippe Starck’s head emerging from the top of the building on a plasma screen, we wondered if the people who desire to buy into Starck’s rich boy minimalism really want to live on a nothing-special stretch of East 23rd Street?” 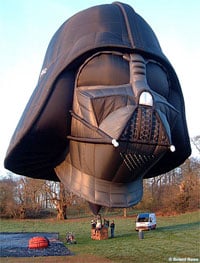 Micron Technology Inc., whom I posted about last week, has added sexual orientation to its nondiscrimination policies: “The move comes after The Advocate revealed last week that the Boise, Idaho, company’s board of directors had ignored an unprecedented 55 percent shareholder vote in favor of adding both sexual orientation and gender identity to its nondiscrimination policies.”

The Netherlands’ recent court order that its territory Aruba recognize same-sex marriages has rekindled a gay rights debate in the Cayman Islands: “‘We either fight the FCO, UK for self-determination on this issue of homosexual marriage or in short order we will face the same situation here in the Cayman Islands,’ the People for Referendum said in a press release. ‘Either we exercise our UN mandated inalienable self-determination rights to ensure the Constitution does not allow homosexual marriage or acknowledge and let our people know the fact that it’s not a matter of if homosexual marriage will become legal in our Cayman Islands by the UK’s Order in Council.'”

Ricky Martin shows footage of himself nude at concert.