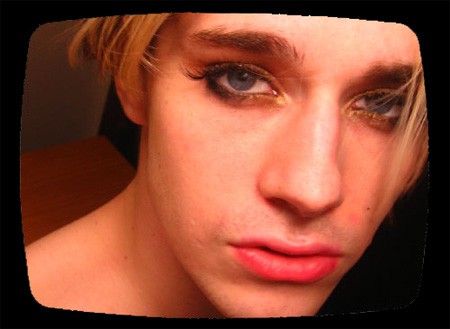 You may have watched some of the videos I’ve posted of Chris Crocker. Crocker has, to say the least, a unique personality, and has developed a massive YouTube and MySpace following because of his often nonsensical, sometimes hilarious, spontaneous musings made before a video camera in his home.

What was not known before now was much about the person behind the videos. Eli Sanders at The Stranger was so intrigued he made a trip to Crocker’s hometown, a place Chris likes to call “Real Bitch Island”. It’s a small town in the rural south.

What Sanders found was less of an egomaniacal YouTube star with attitude, and more of a desperate but hopeful gay boy whose experiences in his home town illustrate the plight that many young gay people face in small towns across the country — loneliness, harassment, isolation.

Sanders writes of a trip to the local mall with Crocker: “As we walked around, past the Sunglass Hut, past the pushy smells of scented candles and baking cookies, people stared hatefully at us, and mostly at him. They stared hard, with the kind of presumed right to glare that people in more sophisticated places wouldn’t dare show. Chris ignored it all, checked out the cover of the latest W magazine at a bookstore, pronounced it boring, and then nonchalantly showed me the mall video arcade whose back room he’d hid in when, one day while shopping, he’d heard a girlfriend of his shout: ‘Run, Chris!’ He’d turned around, that day at the mall, to see a gang of boys chasing him down, coming at him over the beige tiles. He knew he couldn’t stand and fight and win. He knew that was only a fantasy, perhaps suitable for a web video but not for real life. He ran.”

The difference between some gay kids who are bullied in small towns is that Crocker has found his connection to the outside world in the form of the internet, which he hopes will be his ticket out. I hope it happens for him.

Before you read Sanders’ excellent piece, I’d urge you to familiarize yourself with some of Crocker’s videos, like the ones here. More can be found here as well.