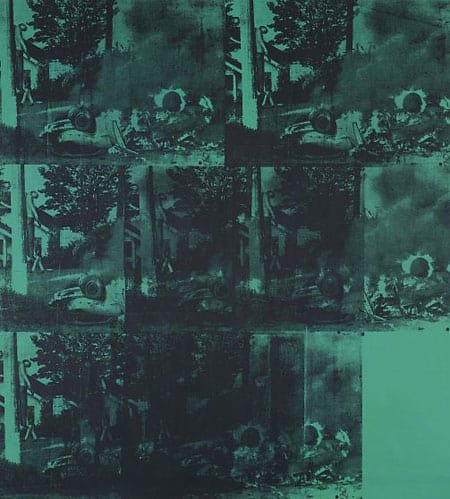 Andy Warhol’s “Green Car Crash (Green Burning Car I)” missed the record for post-war art at auction yesterday by a margin of $1.12 million. The Warhol sold for an astonishing $71.72 million, nearly double its estimate, but couldn’t catch the hot item of the night before, Mark Rothko’s “White Center (Yellow,Pink and Lavender on Rose)” which went for $72.84 million. 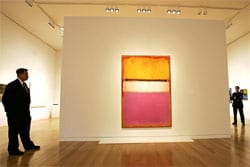 The buyers of both the Warhol and the Rothko are unknown, but New York magazine has some speculation on the Rothko piece: “Indeed, internal speculation is that two of the four bidders, if not the winner, were Russian. (Rothko was actually born Marcus Rothkowitz in Dvinsk, Russia, in 1903.) Sotheby’s had given a hard sell on the painting to buyers who bid on behalf of an art-collecting suite of Russian vodka, metals, and oil oligarchs. Sotheby’s auctioneer Tobias Meyer had even argued, perhaps implausibly, that the filmy abstract painting was about ‘the immigrant experience.'”

Some background on the Car Crash piece: “[Warhol] painted the Green Car Crash by repeating a photo of a bizarre accident published in Newsweek. During a police chase, a fleeing car crashed into a telephone pole, overturned and hurled the 24-year-old driver against a spike in the pole. The multiple images show him limp and impaled. The painting last appeared at auction in 1978, when it fetched about $72,000 at Christie’s London.” 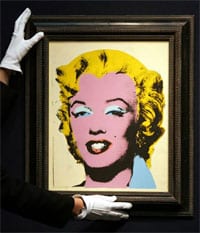 Another Warhol, “Lemon Marilyn”, which has been in the hands of a single owner since it was acquired in 1962, went for $31 million.

All-in-all, Christie’s took in $385 million, the second-largest amount for any auction in history.

You may have missed…
Art Market on Fire: Auctioned, Sold, and Stolen [tr]

Previous Post: « Christopher Hitchens Challenges Credibility of ‘People of Faith’
Next Post: Passions Takes it into the DL Gay Bedroom »