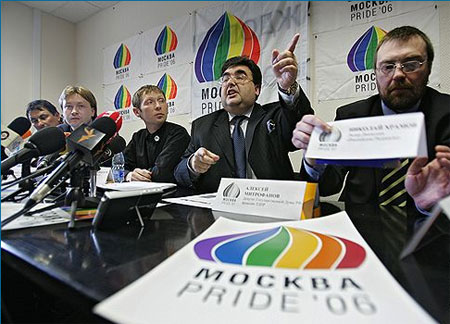 Moscow authorities have once again banned a Gay Pride parade which was scheduled for May 27th. Organizers say they plan to rally anyway, and are receiving support from at least one government official:

“Parliamentary deputy Alexey Mitrofanov (Second from left) attended a news conference of the Moscow Pride Parade on Tuesday to supports the organizers. He told the meeting that blocking the gay pride parade would set a dangerous precedent for bans on demonstration by other minorities and opposition groups that authorities dislike. Mr. Mitrofanov added, however, that he would not be rallying with gay rights activists, since taking part in the unsanctioned march is ‘absolutely inappropriate for a Federation Assembly deputy.'”

The press conference was reportedly interrupted by protestors who threatened, “Moscow will drown in gay blood” should the parade be held.