Authorities are still trying to decide whether they will bring hate crime charges against Steven Andrew Moller, the 18-year-old who took Sean Kennedy’s life away with a punch last week outside Brew’s Bar in Greenville, South Carolina. Moller has been charged with murder and is being held without bond at Greenville County Detention Center.

Kennedy was leaving Brew’s Bar when Moller jumped from a car, punched him, and then fled. Kennedy, who was felled by the punch, died 17 hours later. 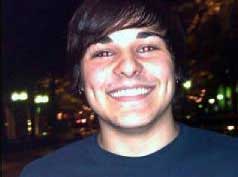 Kennedy’s mother, Elke Parker, has spoken out about her heartbreaking loss. She told News Channel 7-Greenville that Sean Kennedy, the third child in the family, was out to them:

“When Sean told me he was gay, he said ‘mom, I understand if you don’t want to love me anymore.’ I told him there is nothing, ever, that you can do to make me stop loving him. I never thought that who Sean was, is what would take his life.”

She added: “You never think to talk to your son about do you want to be cremated or do you want to be buried? I can’t believe how much hate there is in this world. He was a leader. He was a friend. He was just a giver. No matter what you needed, you didn’t even have to ask. On his Myspace we had over 50,000 hits within two days, with messages from people. We knew Sean, we loved Sean, he did this for me, this is how he helped me. I am proud that I was his mom. No. I am proud that I am is mom, not was. This young man made such an impact on people’s lives. He died way too soon, but, he will be remembered.”

Parker says she will push for hate crime laws in South Carolina in her son’s memory: “It may not help Sean today, but I want it to help future victims that they can be assured that there is justice. If your son or daughter is different, you need to support them for who they really need to be.”

Parker shared a poem Sean had written that she discovered in his room.

I stand tall with all of my pride.
You hate.
You discriminate all who are not like you.
Yes, your words do hurt.
But I stand in the end.
I’m a strong person, bigger than you…
I’ll be standing there with a grin.

The family is starting a non-profit called Sean’s Last Wish to push for a hate crime bill. Details have not yet been released.