Eric Hainstock, the 16-year-old Wisconsin teen who last year (at age 15) armed himself, entered his high school, and shot his high school principal John Klang three times pleaded not guilty to first-degree intentional homicide yesterday in Sauk County Circuit Court. He is charged as an adult and could face life in prison if convicted, according to the Associated Press. 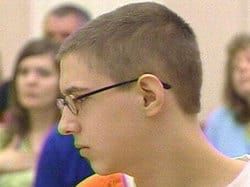 The homicide, on September 29 last year, has gained attention because it came after what Hainstock claims were years of abuse at the hands of his family and repeating bullying at school, harassment which school officials continually refused to recognize. Hainstock and supporters claim that the shooting was a plea for attention gone terribly wrong:

“Hainstock said that a group of kids had teased him by calling him ‘fag’ and ‘faggot’ and rubbing up against him, the complaint said, and the teen felt teachers and the principal wouldn’t do anything about it. So Hainstock decided to confront students, teachers and the principal with the guns to make them listen to him, according to the complaint.”

Klang was shot in the back of the head, chest, and leg. While wounded, he reportedly wrestled Hainstock to the ground. He died later that afternoon.

According to the MySpace site SaveEricHainstock, “Eric claims he brought the weapons to school to get someone to listen to him. Since dead people can’t listen, murder didn’t seem to be his intention. In a desperate attempt to stop the bullying he used the threat of a gun. Eric’s plan went chaotically wrong that day. As guns will often do, instead of getting someone to listen, they got someone killed. Not only was Eric severely bullied and preyed on at school every day from a young age, he was abandoned by his mother, abused by his father and step-mother and neglected at home. Family members have said Eric was bullied at school and abused at home. He had no where to turn, he could do nothing right. They said Eric raised himself. His father, Shawn Hainstock doled out unorthodox, humiliating punishments. Hot peppers and hot pepper sauce was forced down Eric’s throat, induced physical exhaustion such as forced running, being forced to stand in prolonged torturous positions. Also, Eric was beaten with belts and other objects; he was bitten, denied after school snacks and seconds at dinner, and was living in filthy conditions at home including animal excrement and clutter at fire hazard proportions.”

Hainstock’s attorney has requested a speedy trial and asked that videotaped statements taken by police be suppressed as evidence. Said public defender Rhoda Ricciardi: “It was not a knowing or voluntary waiver on his part of his constitutional rights.”