Today, a statue of Alan Turing will be unveiled at Bletchley Park, honoring the man who has come to be known as Britain’s greatest inventor. 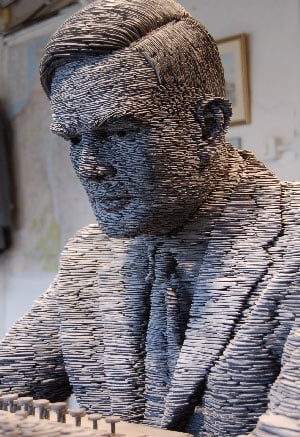 During World War II, Turing, who is also known as the father of modern computing, devised the Turing Bombe, a codebreaking device that was used to decipher the Nazi enigma codes, up to 3,000 messages per day.

American billionaire and philanthropist Sidney Frank funded the new statue, according to The Inquirer:

“The life-size one and a half ton statue is made from half a million pieces of five hundred million year old Welsh slate. Stone which would have been in Nazi control, if Turing had not had the mathematical genius to crack the German Naval Enigma messages during world war two. Later, his Bombe machine was to provide a body of work that provided the foundations on which the modern computer age was created. Of the people who have heard of him, few know the proper context of his death. ‘The only Alan Turing I know of is the mathematician, logician, and cryptographer who died in 1954 from eating an apple,’ said one surveyee. The origin of the Apple symbol is meant to be a tribute to Turing.”

The reason thought to be why Turing killed himself with the apple, which was laced with cyanide, is because Turing had been convicted just two years earlier of ‘gross indecency’ after it was discovered that he had been in a homosexual relationship. Due to that conviction, he had been ordered to undergo hormone therapy.

Turing, a brilliant inventor and mathematician, was pushed to the fringes despite his talents just because he was gay. Sound like a few Arabic linguists we know?

“Many thanks for your email. I completely understand your comments. However, in the context of the statue and Bletchley Park, the press release relates entirely to his invaluable work during the war years and is not in any way an attempt to whitewash his sexuality. This isn’t to say that his sexuality isn’t important in the overall story of the man and that he wasn’t treated abominably in later years. However, with very limited funds and resources, the Park is not able to tell the full life stories of the many heroes and heroines who made such a difference to the outcome of the war.”

They later issued a fuller apology. Said director Simon Greenish: “The press release did not include a statement about him being gay, which perhaps it could have done, this was not a deliberate ommision (sic) but, I certainly accept, could have been an opportunity which was missed.”

Said Gay.com’s Stewart Who: “It’s a bit like talking about Martin Luther King, but not mentioning that he’s black.”