A bill that would allow same-sex couples to marry in California passed the state Assembly on a party-line vote of 42-34 yesterday, moving on to a Senate vote and perhaps another showdown with Governor Arnold Schwarzenegger. 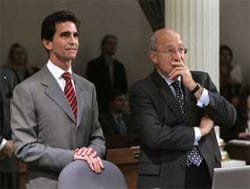 The Sacramento Bee reports: “Assemblyman Mark Leno D-San Francisco (left, with Assemblyman Pedro Nava (D-Santa Barbara)), characterized his Assembly Bill 43 as ‘marriage equality.’ ‘Why would we want government dictating affairs of the heart?’ he asked. But Assemblyman Anthony Adams, R-Hesperia, said that supporting the notion of gay marriage violates his religious beliefs. ‘As a Christian, I do believe that the act of homosexuality is immoral,’ he said. Unlike two years ago, Tuesday’s debate was not angry or hurtful, though both sides were passionate in their views…Under AB 43, gay and lesbian couples would be able to obtain civil marriage certificates from local government. Churches would not be required to perform such weddings…But critics of AB 43 noted that Californians overwhelmingly passed a ballot measure seven years ago that said only marriage between a man and woman would be valid in the state. ‘The will of the people has been spoken,’ Adams argued.”

Schwarzenegger vetoed a similar bill in 2005. He has said he’ll do it again should the measure come before him.