The Democratic Presidential candidates debated in Manchester, New Hampshire on Sunday night. Above, a moment from the debate in which Hillary Clinton was asked if her husband’s “Don’t Ask, Don’t Tell” policy was a mistake. 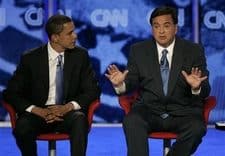 After Mike Gravel ended the clip above by interjecting, “Should have been gotten rid of 20 years ago,” Bill Richardson was allowed an answer on the issue. He said:

“I love all this parsing and senatorial courtesy and ‘on the one hand, on the other hand.’ Here’s what I would do. I would do what I did as governor of New Mexico. One, I would move in the Congress for a hate crimes law. I would have domestic partnerships. I would have civil unions. I would initiate laws that practice non-discrimination on the basis of sexual orientation. I would get rid of ‘don’t ask, don’t tell.’ I voted against it as a congressman. A president has to show leadership…and this country should not be asking a person who is giving up their life for this country in the military should not giving..should not giving (sic) a lecture on sexual orientation.” 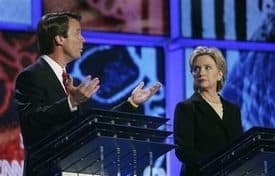 Edwards was then asked to follow on with a question about civil unions. Said Edwards: “Well, first of all, I think what the governor did and what New Hampshire has done is a great example for the rest of the country, not only civil unions, but all the partnership benefits, including Senator Clinton talked about getting rid of this ‘don’t ask, don’t tell’ policy. I don’t think the federal government has a role in telling either states or religious institutions, churches, what marriages they can bless and can’t bless. I think the state of New Hampshire ought to be able to make that decision for itself, like very other state in the country. I think every church ought to be able to make that decision for itself. And I think it’s very important that we stand up against intolerance and against discrimination. But I want to add one thing on something that Governor Richardson said, because it’s been a tone of everything that’s been discussed here today. The place that I differ with Senator Biden, Senator Clinton, and I guess to some extent Senator Obama — and I agree with Governor Richardson — it is the job of the president of the United States not to legislate, but to lead.” 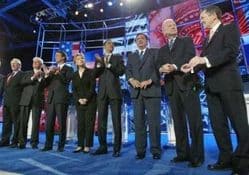 The Human Rights Campaign. released a questionnaire prior to the debate showing the candidates’ responses to a variety of issues. All but Mike Gravel answered.

Each candidate said they support civil unions, except for Dennis Kucinich, who supports gay marriage. The candidates agreed on a wide variety of other gay-related issues including adding sexuality to the federal hate crimes law, a bill barring anti-gay discrimination by employers, adding same-sex couples to the Family and Medical Leave Act, and amending the Uniting Americans Family Act to give gays immigration rights for their partners. They also unanimously supported repealing “Don’t Ask, Don’t Tell”.

Previous Post: « Rearview Mirror: Looking Back at the Week on Towleroad
Next Post: Inquest: Boy Killed Himself on Train Track After Gay Bullying »