Jonathan Reynolds, a 15-year-old in South Wales, was killed by a train after he laid on the tracks to commit suicide in January 2006 because he had been bullied in school over his sexuality, an inquest heard last week. According to the Times Online, Reynolds had confided to a friend he was gay just weeks earlier. 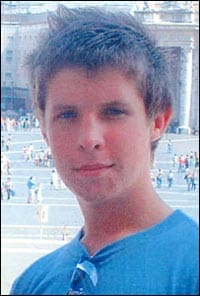 The paper reports: “Moments before he died, Jonathan Reynolds sent harrowing text messages to his family telling that them they were not to blame for what was about to happen. A passer-by saw him holding the mobile as he lay down on the tracks in front of a train travelling at 85mph (136km/h) through Pencoed railway station near Bridgend, South Wales. In his last text message sent to his father, Mark, and his 14-year-old sister, Samantha, the teenager wrote: ‘Tell everyone that this is for anybody who eva said anything bad about me, see I do have feelings too. Blame the people who were horrible and injust 2 me. This is because of them, I am human just like them. I hope they rot in hell 4 what they made me do. They know who they are.’ He added: ‘None of you blame urself mum, dad, Sam and the rest of my family. This is not because of you.’ A postmortem examination showed that Jonathan, who achieved a grade A in his GCSE Welsh oral exam on the day he died, had a blood-alcohol level three and a half times the legal limit for driving.”

Boy, 15, lay down in front of train after gay taunts [times online]