eHarmony, the dating site with strong ties to right-wing religious organization Focus on the Family, has been sued by a woman in Los Angeles for discriminating against gays and lesbians. 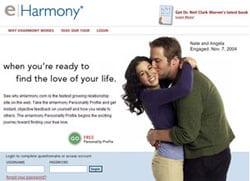 According to Reuters: “Lawyers bringing the action said they believed it was the first lawsuit of its kind against eHarmony, which has long rankled the gay community with its failure to offer a ‘men seeking men’ or ‘women seeking women’ option. They were seeking to make it a class action lawsuit on behalf of gays and lesbians excluded from the dating service.”

The company called the claims “false and reckless” in a statement to the press:

“The research that eHarmony has developed, through years of research, to match couples has been based on traits and personality patterns of successful heterosexual marriages. Nothing precludes us from providing same-sex matching in the future. It’s just not a service we offer now based upon the research we have conducted.”

The lawsuit seeks damages for those discriminated against, as well as a change in the company’s policy.

The ad below, produced by rival dating company chemistry.com, took advantage of eHarmony’s policy by promoting themselves as an inclusive alternative.