A 39-year-old British man from Edinburgh, Scotland is being held in the stabbing death of a German man Karl Heinz Thonningen, 44, in the Playa Del Ingles resort in Gran Canaria. 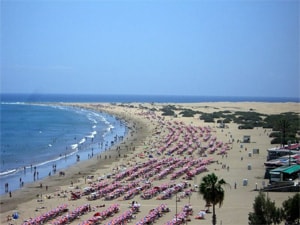 According to the Edinburgh News: “Spanish police, who only reveal the initials of suspects, have identified the arrested man as EB. They then passed the case on to a Spanish judge to investigate, and the man, who has not been charged, is due to appear in court in private later today or tomorrow. The area of the killing is packed with bustling gay bars and Mr Thonningen is understood to have gone on a night out while his partner stayed in the hotel. At about 5am, he was walking along a quiet street called Calle Timple where he was staying with friends, when he was attacked and stabbed through the heart. His body was found by another holiday-maker who immediately called police. Forensic officers cordoned off the area but have been unable to trace a murder weapon. Ambulances attended the scene but according to reports, Mr Thonningen had suffered a violent attack and paramedics were unable to resuscitate him.”

The attacker, EB, was discovered after the attack in a drug-induced coma and authorities believe it was a suicide attempt. They also believe that the attack was motivated by EB’s discovery that his victim was in a long-term relationship.

According to unconfirmed reports, both EB and Thonningen were at the resort with their respective partners.