It’s a crime that seems to have been virtually ignored by the media. It took place on April 12th in Crothersville, Indiana, a small town halfway between Indianapolis and Lousiville. 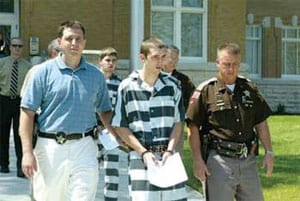 DailyKos reports: “Two young men in Jackson County Indiana said they were so freaked out when ‘propositioned’ by Aaron Hall on April 12th, that they proceeded to beat the 100 pound, 5’4 man for hours, using their fists, boots, dragging him down a staircase while his head slammed into each step, and then throwing him in a ditch and leaving. Aaron managed to crawl out of the ditch and out into a nearby field, where he died, alone and naked.”

The sole paper to report on the crime, The Bloomington Alternative, reported that “[19-year-old Garrett] Gray (in stripes, behind), [18-year-old] Coleman [King] (center) and others, including 21-year-old Robert Hendricks and uncharged co-conspirator John Hodge, told police remarkably similar stories about a violent reaction to a homosexual advance in Gray’s Crothersville home, according to court documents filed by police in the case.” 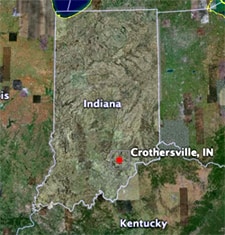 “According to the local paper, The Crothersville Times, a witness said 19-year-old Garrett Gray, upon learning that Hall was dead, ‘began vomiting and making statements of what his dad would say when he found out about this incident.’ The fact that this tale has received almost no media attention outside Jackson County, Monroe’s far southeast-corner neighbor, is but one of its bizarre twists. Another is the suggestion that Hall made no sexual advance on 18-year-old Coleman King, the other accused, that he and Gray made up the story as an excuse for murder. There’s a legal theory for their argument. It’s called the ‘gay panic defense,’ and it suggests that temporary insanity from exposure to homosexuality is a defense against murder. Matthew Shepard’s killers tried to use it.”

Indiana Bloggers are questioning the media’s inaction as well.

Give the Bloomington Alternative piece a read. This story needs more attention.