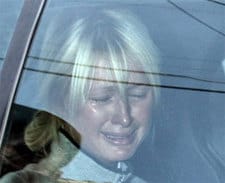 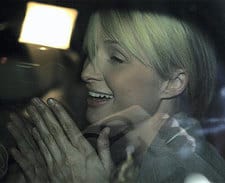 “Hilton was wearing jeans and a white top and green jacket. Her mother and father had pulled up to the front of the facility in a black Escalade to pick up their daughter. Paris Hilton sauntered down the brick walkway, smiling and waving a few times and saying ‘Hi.’ She got into the waiting vehicle as it was swarmed by photographers. Sheriff’s spokesman Steve Whitmore said Hilton thanked the guards, nurses and other staff on her way out. Whitmore said Hilton stayed in the medical ward at the facility. He described her as demure and friendly and relieved to be through with the sentence. ‘She has fulfilled her obligation. It’s now completed,’ Whitmore said.”

Hilton will appear on Larry King Live Wednesday night. Barbara Walters had the opportunity to interview her, but turned it down.

Walters told US Weekly the interview was “beneath her”: “Look, I’ve done prison interviews before, but people like the Menendez Brothers were really important news stories. This wasn’t. And even though I’d already written my questions, when all that pay-for-play stuff happened, I suddenly felt this was not up to my standard. It…felt…sort of …tawdry. The whole thing somehow was beneath me. For [ABC] it was ratings. For me it was respect. I’m fortunately at a point in my life where I can choose what I want, and this was solely my decision. [ABC] respected my decision and walked away. Some agreed with my decision, some didn’t. For me it was just a question of respect.”