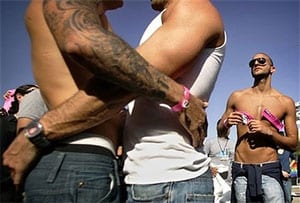 Once again, ultra-orthodox Haredi jews are doing everything they can to put a stop to a planned gay rights rally in Jerusalem, including placing a curse on those who participate.

A group of rabbis from the extremist anti-Zionist Eda Haredit sect issued this warning on Sunday:

“To all those involved, sinners in spirit, and whoever helps and protects them, may they feel a curse on their souls, may it plague them and may evil pursue them; they will not be requitted of their transgressions from heavenly judgment.”

Ynet News reports: “The Edah Haredit is an extreme body which has declared ideological warfare against the “heretic Zionist government.” Its members shun Knesset votes, do not carry Israeli ID cards, and refuse allowances from the government budget. Edah Haredit rabbis warned Sunday that anyone who participates in the gay parade will be hurt ‘in body, soul and finances.’ The rabbis threatened participants citing the ‘success’ of previous curses: ‘Know what happened to the evil persons who were cursed, and thus feel in your souls that your end will be bitter,’ the statement read. ‘We are in a grave situation,’ wrote the editor of the Edah Haredit mouthpiece, Rabbi Shmuel Pappenheim. In placing the curse, ‘The Badatz acceded judgment to the heavens; they will be dealt with there.'”

Police have given organizers preliminary approval to hold the event but said it is still possible that it could be revoked if law enforcement feels that resulting violence would be too disruptive.