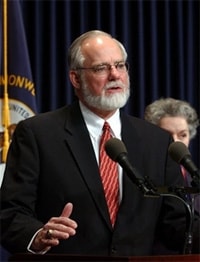 The full document is here.

Holsinger also voted to oust a lesbian pastor from the United Methodist Church, the NYT reports:

“As president of the Methodist Church’s national Judicial Council, Holsinger voted last year to support a pastor who blocked a gay man from joining a congregation. In 2004, he voted to expel a lesbian from the clergy. The majority of the panel voted to keep the lesbian associate pastor in place, citing questions about whether she had openly declared her homosexuality, but Holsinger dissented.”