A boatful of 30 heterosexuals will float down the canal in Amsterdam’s annual gay boat parade on the weekend of August 3rd to 5th in order to show solidarity with gays and protest against rising intolerance in the Dutch capital. 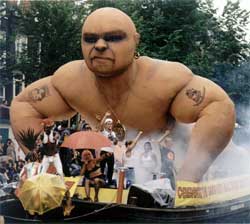 Reuters reports: “The organiser of the ‘hetero boat’, Coos Peterse, said on Friday it’s inclusion was a reaction to a growing number of attacks against homosexuals in the Netherlands. Dutch media reported this month that a kissing lesbian couple was attacked in Nijmegen and had to be treated in hospital. In Amsterdam, two gay men were abused and one was seriously injured. ‘What always bothered me is that the public reaction wasn’t that strong. I would expect a much stronger outcry,’ Peterse, 25, said. ‘Since I wasn’t hearing it, I thought maybe it was a good idea to make a statement, to celebrate with them that you’re free in Holland to live to your own preference.'”