The City of Chicago wants the court to dismiss a lawsuit brought by Alexander Ruppert, who sued the city after police took him into custody and then allegedly beat him after he used a cell phone in the back of the patrol car. 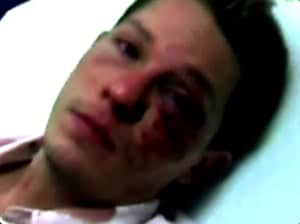 As reported by the Chicago Tribune in June: “According to Ruppert’s lawsuit, two officers asked him to leave the bar and put him in the back of a squad car but didn’t handcuff him or arrest him. The officers have not been charged with a crime. They made ‘vulgar comments referring to his sexual orientation’ and after driving him a block away from club, hit him in his face and on his head while calling him names, according to the lawsuit. Ruppert weighs about 120 pounds, while the officers each weigh more than 200 pounds, Erickson said . Ruppert told the officers he was HIV-positive and pleaded for medical attention, the lawsuit said. The officers took him to Weiss Memorial Hospital, where he received 16 stitches for a cut under his left eye and other treatment, the suit said. Simonton said that according to the initial charges, Ruppert was ‘injured during the transport to the police station,’ but she had no further details. The two officers were treated for injuries at a hospital, Simonton said. Ruppert’s lawsuit claimed that the officers’ injuries were not legitimate and included an injury to a knuckle that one officer suffered while punching Ruppert.”

The City has filed a motion to dismiss Ruppert’s lawsuit “because gays aren’t entitled to equal protection under the U.S. Constitution” according to the Chicago Free Press:

‘When we filed the equal protection count, we knew the federal government was behind the curve in recognizing that the equal protection clause should cover sexual orientation,’ said attorney Michael Oppenheimer. ‘We expected more from the City of Chicago. The City’s position is an affront to all residents of this fine city.’ Oppenheimer’s partner, Jon Erickson, said the City’s position surprised him, given the ongoing effort to bring the 2016 Olympics to Chicago. ‘The international community is far ahead in recognizing the equal rights of the gay community,’ Erickson said. ‘To deny gay people equal protection under the law will not play well internationally.'”

Previous Post: « People with AIDS Said Buried Alive in Papua New Guinea
Next Post: Shadow to Fall Across the Moon »