TMZ ran into Chris Crocker emerging from Mr. Chow on Saturday night. Crocker appears to be thoroughly enjoying the temporary window of fame his wailing rant about Britney Spears has afforded him. 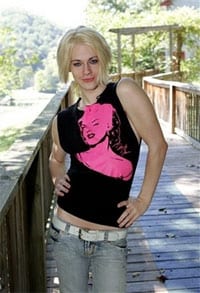 Crocker also gets a profile treatment from the Associated Press:

“It’s tough to be openly gay in a conservative Southern town, he says. There have always been death threats, bullying and glares at his clothes and makeup. Oh, and he’s always pushing someone’s buttons. ‘My grandparents can’t go to their church any more,’ said Crocker, his spunk clouded momentarily with genuine concern. He’s fiercely protective of his grandparents, Pentecostal Christians who took over raising him when his teenage parents couldn’t. Crocker said his outrageous behavior, a stark contrast to the rest of the family, started when he was in kindergarten. He raised eyebrows that year for bringing Barbie dolls to class for show-and-tell. ‘What I do affects them, and I feel bad for that,’ he said of his family. Crocker’s grandmother, who declined to be interviewed, is seen in a handful of his videos, appearing as an uncomfortable bystander. In one, Crocker is imitating a Christian woman interviewing his grandmother, who says she loves her grandson. In another, his grandmother is patiently arguing with him over his attitude. Crocker said that when she agreed to be taped, ‘she didn’t really grasp the size of the audience.'”