A gay Ammon, Idaho man claims that he, his partner, and their 11-year-old son have been harassed continuously since they moved into their home two years ago, and says that the local police have repeatedly ignored their calls for help. 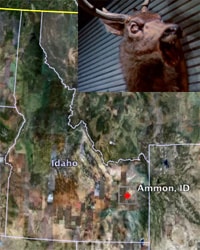 Chukk Nielson told local station KIDK: “We got egged, a deer put put into the mailbox, spray painted with works fag, queer, toilet papered with human feces wrapped in it, thrown up against our house.”

Nielson claims that he came out one day to retrieve the mail and found a deer head inside the mailbox.

According to Nielson, the police have done little to follow up on the crimes: “We’ve been told unless we physically see the perpetrators doing the action, that they can’t do anything about it. They did take picture (sic) every time, but never got filed, don’t have case number don’t know where file went.”

Nielson told KIDK that the damage is now over $2,000 but that the emotional damage inflicted is far greater: “I don’t feel safe in the neighborhood. Ammon pays so much for Bonneville County to protect us and I don’t feel we’re getting that protection. If things get worse and not taken care of, I will file a suit against the Bonneville County Sheriff’s Office.”