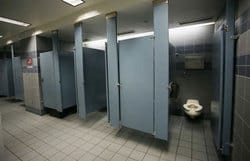 The Minneapolis Airport is installing new partitions between the toilets:

“Airport officials plan to put in new stall dividers just 2 to 3 inches above the floor, instead of as much as a foot now. The new dividers will go in two bathrooms where the airport has had complaints about sex, including the one where Craig was arrested.”