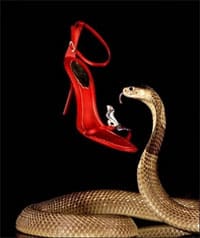 Harrod’s department store in London brought in a live Egyptian cobra on Monday to guard a pair of $120,000 ruby, sapphire, and diamond-encrusted Rene Caovilla sandals at their unveiling. The snake has since been returned to its owner.

Reagan ex-wife and actress Jane Wyman is dead at 93.

Woman found shot dead outside gay nightclub in Bethlehem, Pennsyvania: “Bethlehem Police Lt. Joseph Kimock said Robberson’s body was found at 7:16 a.m. Saturday when officers responded to a report of a person passed out in a vehicle behind Diamonz. Lehigh County Deputy Coroner David Krause pronounced the woman dead about 45 minutes after officers found her. Krause ruled the death a homicide. An autopsy will be conducted Monday.” 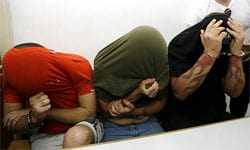 In Jerusalem, police arrest cell of cell of young Israeli neo-Nazis accused of attacking gays, religious Jews, drug addicts and foreign workers: “Eight immigrants from the former Soviet Union have been arrested in recent days in connection with at least 15 attacks, and a ninth fled the country, police spokesman Micky Rosenfeld said, in the first such known cell to be discovered in Israel. All the suspects are in their late teens or early 20s and have Israeli citizenship, Rosenfeld said. A court decided Sunday to keep them in custody.” More from the Daily Mail…

And more from the VMAs:

Kid Rock and Tommy Lee show what grown-ups they are…