Late on Friday, the California Senate agreed to Assembly amendments to a gay marriage bill by a 22-15 vote and sent the measure to Governor Arnold Schwarzenegger, who is expected to veto it, as he did a similar bill two years ago: 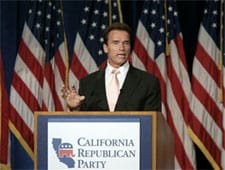 “Schwarzenegger has not taken a specific position on AB 43, although he vetoed a similar gay-marriage bill in 2005. His spokesman, Aaron McLear, said the governor will abide by the results of a ballot initiative in which 61.4 percent of voters said the state should restrict marriage to a union between a man and a woman.”

This bill defines marriage as “a civil contract between two persons” according to the AP, and would “retain the right of religious institutions to refuse to sanction the unions.”