As she prepares to accept PFLAG’s “Straight for Equality” award, Dear Abby (aka Jeane Phillips), whose syndicated column appears in approximately 1,400 newspapers, says full marriage equality is the only way to go: 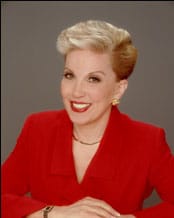 “I believe if two people want to commit to each other, God bless ’em. That is the highest form of commitment, for heaven’s sake….If gay Americans are not allowed to get married and have all the benefits that American citizens are entitled to by the Bill of Rights, they should get one hell of a tax break. That is my opinion.”

It’s an issue which puts her at odds with even those closest to her, according to the AP:

“Phillips realizes not everyone agrees with her on gay rights; she and her husband ‘argue about this continually,’ she said. He thinks civil unions and domestic partnerships ‘would be less threatening to people who feel marriage is just a religious rite.’ She thinks anything less than full marriage amounts to second-class citizenship.”

She also says she’ll continue plugging not only PFLAG but suicide lines for gay teens, and a PFLAG affiliate for parents with kids who identify as transgender:

“I’m trying to tell kids if they are gay, it’s OK to be gay. I’ve tried to tell families if they have a gay family member to accept them and love them as they always have.”