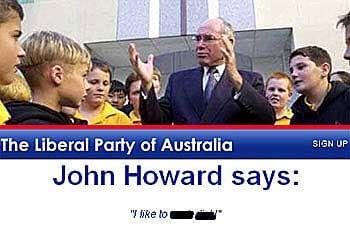 Australia’s Liberal Party is denying claims that their website was hacked after an email with a purported screencap was sent to members of the media. The screen capture featured a photo of John Howard with the caption “John Howard says: ‘I like to suck dick'”.

Said Howard in response to the reports: “I can assure anybody that’s seen it, it’s not me.”

If the “hackers” who sent the email were trying to get their message out, however, the stunt worked, as newspaper sites across Australia went ahead and published the screengrab in question.

Previous Post: « Dear Abby Comes Out for Same-Sex Marriage
Next Post: T.R. Knight is GLAAD He Came Out »