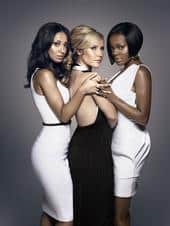 This week, pop/rock/electro trio (as they’re billing themselves these days) Sugababes celebrate the triumph of having both the #1 single (“About You Now”) and #1 album (Change) on the official U.K. charts. It’s no small feat, as the ‘babes have been around long enough to issue five LPs and the ubiquitous greatest hits, and have surpassed the typical sell-by date that sees most pop acts reduced to subpar reality show stints.

But “About You Now” — written by Cathy Dennis (yes, that Cathy Dennis, who had the early ’90s green-bodysuit solo career and later penned Britney’s “Toxic” and Kylie’s “Can’t Get You Out Of My Head”) — actually marks the Sugababes’ sixth British #1. In their home country, they’ve had more hits than the Spice Girls, and this year they became the first pop act to play the main stage at the Glastonbury Festival.

Granted, the gals don’t play their own instruments, but then again, you never saw Beyoncé or Kelly Rowland shredding a whammy-bar-kickin’ guitar solo, either. It just seems that in a land where the only thing passing for fun pop on the American charts these days is Britney Spears, surely we should welcome the Sugababes with open arms.

Here’s the video for “About You Now”: 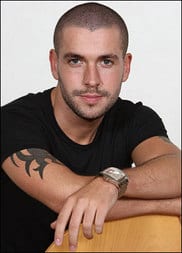 Morrissey performs a new track on Last Call With Carson Daly while Johnny Marr goes back to school and receives top honors.

Annie Lennox and Peter Gabriel to headline South African HIV/AIDS benefit concert for Nelson Mandela’s 46664 campaign. Lennox writes about her involvement with the campaign as a 46664 ambassador in the November issue of Instinct magazine.

U2 to reissue four different versions of The Joshua Tree in November for the set’s 20th anniversary.

The successful life and quick death of the nationwide Buffy The Vampire Slayer sing-alongs: “I was under the impression that everything we were doing was completely legal and had been cleared by the appropriate people,” says Buffyoke organizer Clinton McClung.

Post-rehab, Amy Winehouse and Pete Doherty record a song together.

The Killers’ new single, “Shadowplay” — a Joy Division cover featured on the Control soundtrack as well as the forthcoming Killers’ collection of B-sides and rarities, Sawdust (due November 13).

Soul singer Angie Stone’s The Art Of Love And War, from the newly relaunched Stax label.