Even as he proclaimed that “all Californians are entitled to full protection under the law ‘and should not be discriminated against based upon their sexual orientation,'” California Governor Arnold Schwarzenegger again vetoed a bill that would have lifted the state’s ban on same-sex marriage. 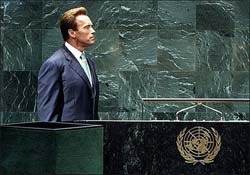 The veto was expected but it was Schwarzenegger’s language that hit a nerve for some.

Kors called it “hypocrisy at its worst.”

According to the AP, “In his veto message, Schwarzenegger said voters and the state Supreme Court should decide the issue. The high court is likely to rule next year on whether California’s ban on gay marriages violates the constitution. The governor said voters ‘should then determine what, if any, statutory changes are needed in response to the court’s ruling.'”