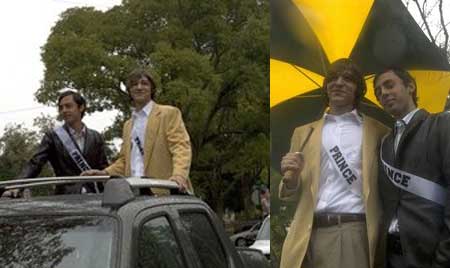 Earlier this month, a gay couple, Brandon Raphael and his prince, Kiernan Gatewood, were elected “Princes” of Davis Senior High School’s Homecoming in Davis, California. They rode the parade route in the back of a pick-up truck and were cheered on by the local comunity and their school.

The Sacramento Bee reports: “In the weeks since officials announced the homecoming court, there’s been no public outcry — not by campus leaders, not by students and not by the community. Students said they were encouraged that the election was not an issue for campus administrators. They said they were less surprised that a gay couple would win than they were that officials allowed it to happen.”

Said Chandler Fox, co-president of the school’s gay-straight alliance: “I think it’s just such a good thing for our school. Just knowing that the other kids recognize them as a couple and would vote for a gay couple to be prince and prince of homecoming. … I don’t know, I just think it’s awesome. I want people to know about it so maybe it can happen at another school.”