Hoping to raise their profile in the theater world to be seen “as one of those theaters that creates new works for the American stage,” the Guthrie Theater in Minneapolis announced they’ll debut a new play by Tony Kushner in Spring 2009, tenatively titled The Intelligent Homosexual’s Guide to Capitalism and Socialism With a Key to the Scriptures. 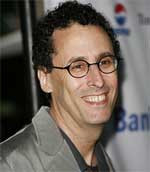 The AP reports: “Set in Brooklyn, N.Y., the play ‘will have a family dynamic, and it will be dealing directly with gay issues,’ Dowling said. The theater, which has never done a Kushner play, started discussing the possibility of a world premiere with Kushner late last year, Dowling said. ‘I have great admiration for Tony’s work,’ Dowling said. ‘Tony is always engaged with the issues – both political and social issues – that really resonate with the audience.’ The theater also wanted to establish itself as a place for both classical and contemporary works, and hopes the partnership with Kushner will let the world know it’s now in the business for world premieres, Dowling said. The Guthrie opened an elaborate new three-stage theater overlooking the Mississippi in June 2006.”