Notes from an Inter-Parliamentary Union meeting between British and Iranian leaders in May were recently released. The IPU is a peace body and part of the meeting concerned questions from the British PMs regarding the hangings of underage youths for the crime of homosexuality particularly the public executions of Mahmoud Asqari and Ayad Marhouni in 2005. Photographs of the disturbing execution were distributed widely across the internet. 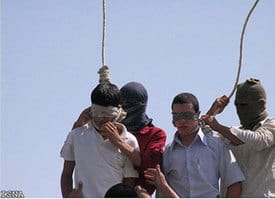 The Times Online reports: “When the Britons raised the hangings of Asqari and Marhouni, the leader of the Iranian delegation, Mr Yahyavi, a member of his parliament’s energy committee, was unflinching. He ‘explained that according to Islam gays and lesbianism were not permitted’, the record states. ‘He said that if homosexual activity is in private there is no problem, but those in overt activity should be executed [he initially said tortured but changed it to executed]. He argued that homosexuality is against human nature and that humans are here to reproduce. Homosexuals do not reproduce.'”

Yesterday, when the notes were released to the public, the British delegation head Labour MP Ann Clwyd said: “It is of great concern that these attitudes persist and we made it clear what we felt.”