The Kentucky gubernatorial campaign is getting even crazier. Yesterday I posted about Christian warbler Pat Boone’s automated robo-calls warning voters about the “San Francisco values” of leading Democrat Steve Beshear.

Another set of robo-calls has gone out now, linking Beshear to “the homosexual lobby” and directing them to the website of The Fairness Campaign, a gay rights advocacy group that has endorsed Beshear. The calls say: “Beshear is receiving major support from out-of-state gay activists and has publicly committed to same-gender relationships, employment of more homosexuals in state government, including teachers, and support for homosexual adoption of children. “If you believe these rights are fair, please vote for Steve Beshear for governor.” 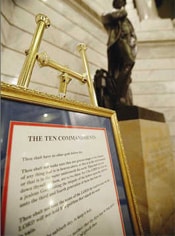 One voter told the Associated Press that the calls were “the ugliest thing I’ve heard in an election probably in my lifetime.”

Incumbent governor Ernie Fletcher, trailing Beshear in the calls, denies having anything to do with them.

The Lexington Herald-Leader reports: “Beshear is ‘far left of Kentucky values,’ Fletcher said at a brief news conference at Blue Grass Airport. Fletcher ran down a list of issues important to social conservatives, including abortion, gay marriage and casinos, which he opposes, and posting the Ten Commandments in public buildings, which he supports. His campaign later challenged Beshear to explain his views on gay marriage, which is unconstitutional in Kentucky.”

While the source of the calls remains a mystery, Fletcher’s desperation is obvious. Yesterday, he ordered the Ten Commandments be put on display in the Capitol Rotunda, a move he said had nothing to do with the election.