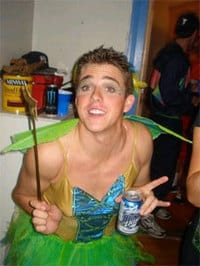 Bank intern busted by boss after “something came up at home” excuse for his day off was later revealed on his Facebook profile. He does make a cute fairy though.

Alabama gay activist Ken Baker dies at 50: “Unity United Church of Christ recently awarded Baker the Crystal Cross for his advocacy work. He was recognized specifically for his role in starting Equality Alabama and Communities of Faith for Full Inclusion. ‘He’s sure going to be missed around here,’ said longtime friend and colleague Lynn Shaw, who is a past president of the Montgomery Chapter of Parents, Families and Friends of Lesbians and Gays (PFLAG). ‘I just can’t believe how everyone’s going to go on and function because he was involved in so many things.’ Baker, who was gay, was known as a quiet, humble man who was creative and determined in his efforts to promote gay and lesbian rights.”

Board of Education in Jefferson County in Kentucky recommends expanding harassment and employment policies to protect gay and lesbian employees, although transgender people are left behind for now: “We decided to include sexual orientation at this time, but decided to hold off on making a decision about transgender because, as of right now, gender identification is both a new and broad definition.”

Janice Dickinson has joined the cast of the UK’s I’m a Celebrity Get Me Out of Here and nature is turning her into a savage: “I’m going to stab her in the middle of the night and take hers. You think I’m kidding? I’ll eat her tits. I’ll fry up those big old boobs.”

Politicos nervous about upcoming “tell-all” book from former gay London top cop Brian Paddick to be released one month before critical election. Paddick: “You will be very surprised by some of the things in it, I can assure you.” 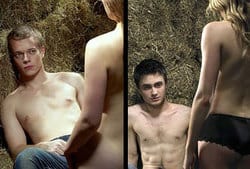 Fred Thompson to be endorsed by right-to-life, same-sex marriage foes in Iowa: “He drew an enthusiastic response from his audience when he praised the U.S. health care system and said: ‘Let’s not let the federal government mess that up.’ The crowd also applauded when he brought up gay marriage and said: ‘Whether marriage is between a man and a woman — I thought that was decided a few thousand years ago!'”

Hugh Jackman’s back at his favorite activity: getting naked at the beach.

North Carolina “ex-gay” minister proclaiming his success: “To follow christ and to say no to my behavior of homosexuality, um I really felt like I could live life differently that that’s what God wanted, he wanted me to pursue him, not pursue men. So people can say, you can’t change and I say yes you can.” See ya at the next public park sex sting!

Gender Issues Analyst Melissa Fryrear of Focus on the Family continues to claim that all gay people have been sexually violated. (via pam’s house blend)