Following two recent dubious votes — one to confirm assumed torture-supporter attorney general nominee Michael Mukasey and the other to confirm racist bigot judge Leslie Southwick in Mississippi — the Huffington Post reports that a coalition of progressive Democrats will ask the California Democratic Party to censure the long-serving Senator at an executive board meeting this weekend. 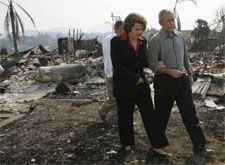 According to the HuffPost, “The move comes as Feinstein again finds herself under fire for saying Thursday that she now supports granting legal immunity to telecom companies that shared customer email and phone messages with the federal government as part of the warrantless surveillance program.”

This follows an “illuminating” trip to California as a guest of George W. Bush on Air Force One.

The full text of the resolution, which can be read on their site, concludes:

“Whereas these examples are far from the only instances where Senator Feinstein, after seeking and securing the support and endorsement of the California Democratic Party, has failed to support the policies and principles of our party. Therefore be it resolved that the California Democratic Party expresses its disappointment at, and censure of, Senator Feinstein for ignoring Democratic principles and falling so far below the standard of what we expect of our elected officials.”

Here’s the online petition for censure.