Colin Farrell’s brother Eamon and his boyfriend Steven are planning a civil partnership, and Colin has agreed to be the best man, according to reports. 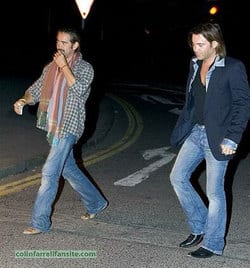 According to Pink News, “Eamon Farrell, 35, is planning to marry his 23-year-old boyfriend Steven Mannion after a proposing to him in New York last year. According to the Mirror: ‘Eamon proposed before Christmas. The pair share a love of art and this is what brought them together. Eamon is a respected dance teacher who set up the National Performing Arts School in Dublin more than 10 years ago. And Steven is a really talented artist who has been welcomed into the Farrell family.’…It is rumoured Colin, 31, helped Eamon choose a diamond and sapphire-studded ring for his boyfriend. The brothers are very close, and have bought houses next door to each other in Sandymount, South Dublin.”

Where the civil partnership will take place is still in question: “The couple have not yet decided where they will exchange vows – but it won’t be in the Republic. The insider told the Mirror: ‘With Irish legislation the way it is at the minute, the wedding can’t be here. But the couple could go to the North or England for a civil partnership ceremony there. It’s more likely though that they’ll get married in the States so Colin’s whole family can be there.”

Previous Post: « Gay Eustace Sparks Debate on Gay Marriage and Overt Sexuality
Next Post: You Think the Economy is Bad Now? »