I’ve brought up the Eustace Tilly cover illustration contest that The New Yorker magazine is running a couple times over the last two weeks. The contest generated at least one gay-themed entry which has generated some playful discussion between bloggers Andrew Sullivan and Dan Savage, both of whom are married. 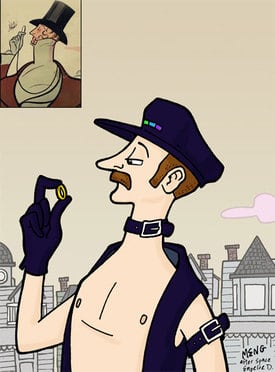 Tilly is the magazine’s mascot (see photo inset). He appeared on the magazine’s first cover in 1924 and appears annually every year, sometimes in a slightly revised form. The contest has generated a lot of entries. The “Gay Eustace” entry (pictured), which features a 70’s-style leather queen contemplating a gold wedding band is the one that has drummed up the dialog.

Sullivan’s initial post on the cover entry described Gay Eustace as “suspended between the past and the future, like the rest of us,” which Savage replied was too ‘either /or’ an analysis:

“Any fool can see what Sullivan means by that crack: Gay Eustace, in his leather vest, cap, arm bands, gloves, and dog collar, looks down his nose at a gold band. Gay Eustace contemplates the wedding ring and the future it represents, a future characterized by family and commitment. The leather gear Gay Eustice wears, of course, represents a past characterized by promiscuity and sexual excess. When Sullivan asserts that Gay Eustace is suspended between the past and the future, between the wedding band and the leather gear, he is arguing that commitment and dog collars are mutually exclusive. To move into the former you must, Sullivan would have us believe, unbuckle the latter. That is not the case. A man, gay or straight, can wear a wedding band and enjoy all it symbolizes—commitment, stability, family—and wear the fetishized skins of dead animals if that appeals to him. In fact, we should encourage him to do so. If we want to strengthen the institution of marriage—and that is what all in the gay family values movement want (although I’m starting to have my doubts about Mr. Sullivan)—we must fight with every tool at our disposal the pernicious notion that marriage, by definition, must always and everywhere signify the death of sexual experimentation and adventure. A man, gay or straight, can be married and trot about Manhattan in a dog collar, if it pleases him and his spouse. And he should be able to do without the depth or sincerity of his commitment being called into question. Just as we don’t presume that a man wearing a wedding band is incapable of adultery, Mr. Sullivan, we shouldn’t presume that man in a leather vest is incapable of commitment.”

Sullivan replied to Savage’s post by saying that they actually “almost” agree. Sullivan actually revised his post to exclude the line “Of course, there’s no reason a leather queen shouldn’t get married either.”

Says Sullivan who wed his partner in Provincetown last summer: “Why did I delete the extra qualification? I guess what I was driving at in commenting on that image is that it represented some kind of collective cultural conflict, as much as a personal one. And while we’d like the conflict to be totally absent, it isn’t. It’s not either/or. But it isn’t totally both/and either, is it? There is something about the most overt sexuality that isn’t easily integrated into marriage in our culture. Maybe we need to adjust that, as Dan suggests. And maybe it isn’t quite that easy, as my deletion implies.”

A worthy conversation, one which says to me that the Tilly entry pictured here is a good one. Your thoughts on the collective cultural conflict, readers?

ADDENDUM: I did not mean to suggest by this post (but perhaps I framed it in too divisive a manner) that Sullivan and Savage are at war on this topic. They’re not, and Dan’s post was certainly meant as a humorous jab rather than an angry one.