Researchers today report that methicillin-resistant Staphylococcus aureus (MRSA), which has up till now been confined mainly to hospitals, according to Reuters, is now being transmitted sexually by gay men in large urban areas — notably San Francisco, Boston, L.A., and New York. 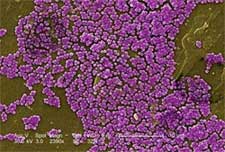 Reuters reports: “Sexually active gay men in San Francisco are 13 times more likely to be infected than their heterosexual neighbors, the researchers reported in the Annals of Internal Medicine. ‘Once this reaches the general population, it will be truly unstoppable,’ said Binh Diep, a researcher at the University of California, San Francisco who led the study. ‘That’s why we’re trying to spread the message of prevention.’…This superbug can cause life-threatening and disfiguring infections and can often only be treated with expensive, intravenous antibiotics.”

MRSA can be passed by human contact or by bacteria left on surfaces.

The SF Chronicle published a graphic today showing cases per 100,000 persons in each of its zip code areas, along with the percentage of male same-sex couples living in those areas.

They report: “Although researchers have stopped short of declaring this form of staph a sexually transmitted disease, the infections are found where skin-to-skin contact occurs during sexual activity. Most of the infections are limited to the skin surface, but the bacteria can invade deeper tissues or disseminate through the bloodstream. According to the federal Centers for Disease Control and Prevention, various forms of MRSA are causing 95,000 of these more costly and potentially life-threatening infections annually in the United States and 19,000 deaths. Until last year, staph infections had never been linked to sexual activity.”

The best defense against preventing the spread of the bacteria is soap and water. Said Dr. Chip Chambers, director of infectious diseases at San Francisco General: “Taking a shower after sexual contact may minimize contamination. Ordinary soap will do. It dilutes the concentration of bacteria. You don’t need antibacterial soap.”