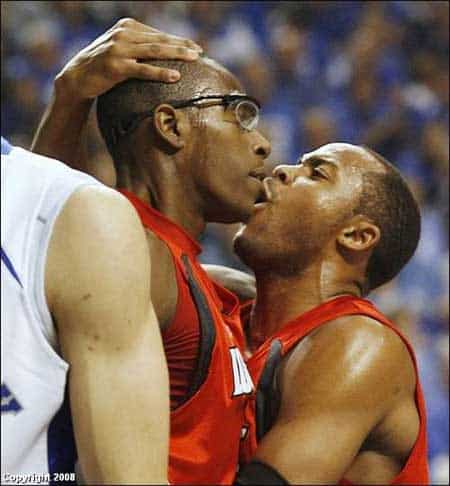 A photo the Louisville Courier-Journal published following a match-up between the U of Louisville Cardinals and the U of Kentucky Wildcats caused such a fuss that a columnist yesterday was forced to publish an explanation. Some readers demanded apologies over the photo of Cardinals players Juan Palacios, left, and Jerry Smith, which some saw as a kiss. The negative reaction, the paper says, was “unprecedented.”

Columnist Pam Platt writes: “Some of the comments registered by angry, offended and/or baffled readers: ‘Awful,’ ‘an embarrassment,’ ‘horrible decision,’ ‘poor judgment,’ ‘distasteful,’ ‘a mystery’ and ‘shame on you.’ I have to admit I was a little baffled by the response. Aren’t sports the province of the ubiquitous fanny pat? Aren’t players in each other’s faces all the time during athletic matches? Yes and yes. So what’s a little game-time hug in that universe?”

Platt explains: “Sam Upshaw Jr., who has been a photographer for 20 years, took the photo of Jerry Smith hugging Juan Palacios in the first half, after a big, emotional play that favored the Cards. In the original photo, there was more of a Kentucky player involved in the play in the frame; only his arm remains in the cropped picture that appeared in the paper…After looking at all the game photos submitted for publication and online posting, Bryan settled on the Palacios/Smith shot that was printed because the picture showed the game’s top scorers and it showed them in a moment of celebration, with one congratulating the other…As for the theory floated by some readers, that this was a purposeful attempt to rile or humiliate Cards fans, it doesn’t really deserve a response but [Sports editor Harry Bryan has one: We’re not in the business of offending or agitating readers…”

Flurry over a photo prompts explanation [courier-journal]
(via gawker)