Politico examines Barack Obama’s position on gays, with regard to the apparent contradiction between his call to end homophobia in his recent speech at Martin Luther King’s Ebenezer Baptist Church, and his association with clergy who support the “ex-gay” movement. This not only includes the Donnie McClurkin incident but also a more recent endorsement and association with Rev. Kirbyjon Caldwell, who was discovered to have an “ex-gay ministry occupying real estate on his website. 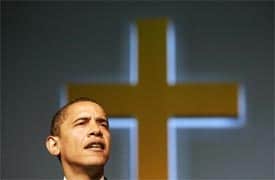 “The twin developments appeared to encapsulate the tension inherent in Obama’s embrace of what he calls a new style of politics, his belief in forging alliances even with those who hold fundamentally different views. In this case, he has spoken out against homophobia in front of black audiences while embracing some black religious leaders who are resistant to gay rights. ‘People are confused,’ said Wayne Besen, a gay activist and founder of Truth Wins Out, a New York organization aimed at countering the ‘ex-gay’ movement. ‘We see one report of him saying powerful words. Then he is hanging out with some shady characters. People don’t know what to make of that.’ By Monday, Caldwell’s church, Windsor Village United Methodist in Houston, scrubbed its Web site of any reference to the gay conversion program, Metanoia Ministry. In a Politico interview Tuesday, Caldwell said his 14,000-member church – one of the largest United Methodist congregations in the country – is not affiliated with Metanoia. ‘I got to tell you, this is going to sound real stupid, but I didn’t know it was on our website,’ Caldwell said. ‘I was surprised and embarrassed by it. I’m embarrassed from the standpoint that I should have known. We have 120 ministries at the church. You can’t be on top of everything.’ When asked if he opposed such programs, Caldwell said: ‘It’s not a ministry of the church. It is not supported financially by the church. It is not located at the church. That is pretty much where I am with it.'”

Previous Post: « The Romney Whisper: Who Was It and Where Did it Come From?
Next Post: Towleroad Guide to the Tube #234 »