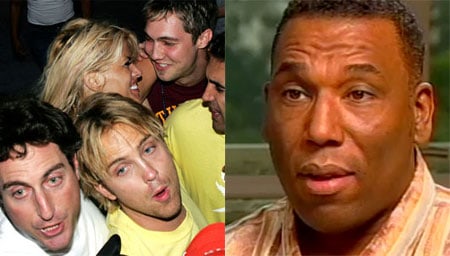 On recent nights you may have seen Anna Nicole’s daughter Dannielynn paraded across a cemetery in the Bahamas by Larry Birkhead under the gaze of entertainment TV cameras. Well, so has Anna Nicole’s former bodyguard, and he’s not happy about it. He talked to Access Hollywood about Birkhead’s recent well-televised return to Anna Nicole’s grave with his daughter: “I thought that was very disgusting, I thought it was staged. I do believe he loves his daughter, but the thing is, when he comes on TV and he parades her off, it seems like it’s like a laugh in Anna’s face. Like, ‘Ha! I got her anyway!’”

The bodyguard also claims that Birkhead is gay and was only a sperm donor to Anna Nicole. Said Big Moe (ironically, that’s his name): “Well, (Anna Nicole) told me that, you know, he was a homosexual. She knew deep down that he didn’t want to be with her…Anybody that’s been around Anna, they would know that Larry wouldn’t be her type. First of all, she liked men that was wealthy, I mean that’s no secret…Because of how Larry looked, she figured, oh my child would look great. Blonde hair, blue eyes, you know, ‘Go great with me and my baby will come out beautiful.'”

It’s not the first time the rumor has surfaced. In April 2007 a male model named Kerrick Ross came forward claiming to be Birkhead’s lover. And in September last year, a tell-all book by Rita Cosby claimed that Birkhead and lawyer Howard K. Stern were involved sexually and made secret deals to split Smith’s estate. In the meantime, lawsuits have been filed.