Former pro basketball star Charles Barkley appeared on CNN’s The Situation Room on Friday and talked about why he’s voting for Obama. He also excoriated members of the GOP who use the bigotry and hate of the religious right to move their agenda forward, calling them “fake” Christians. It’s not the first time Barkley has spoken out about gay marriage. He gave an interview in August 2006 to Chris Meyers on FOX sports in which he said, “I think if they want to get married, God bless them. Gay marriage is probably 1 percent of the population, so it’s not like it’s going to be an epidemic. Hey, trust me, I’m never going to kiss you and say, ‘Chris, you’re sexy.'” 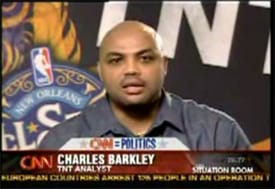 Here’s a transcript of Barkley’s comments from last week, clip AFTER THE JUMP…

BLITZER: All right. One quick point before I let you go. You used the phrase “fake Christians” for conservatives. Explain what you’re talking about.

BARKLEY: Well, I think they — they want to be judge and jury. Like, I’m for gay marriage. It’s none of my business if gay people want to get married. I’m pro-choice. And I think these Christians — first of all, they’re supposed to be — they’re not supposed to judge other people. But they’re the most hypocritical judge of people we have in this country. And it bugs the hell out of me. They act like their Christians. And they’re not forgiving at all.

BLITZER: So you’re going to get a lot of feedback on this one, Charles.

BARKLEY: They can’t do anything to me. I don’t work for them.

BLITZER: You feel comfortable saying all that?

BLITZER: But you can’t lump all these conservatives as being fake. A lot of them obviously — most of them are very, very sincere in their religious beliefs.

BARKLEY: Well, they should read the part about they’re not supposed to judge other people. They forget that one when it doesn’t fit what they want it to say.