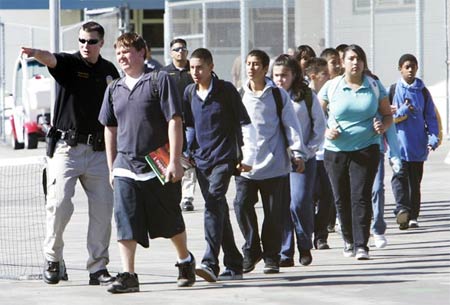 A gay junior high school student in Oxnard, California was shot in front of dozens of other classmates yesterday, the L.A. Times reports:

“The shooting was not gang-related, said [Oxnard police spokesman David] Keith, who added that the school had not been a particular trouble spot before. ‘It looked like it was personal between the two of them,’ he said, declining to elaborate. Some students said the victim, whose name was not disclosed, sometimes wore makeup and feminine jewelry and had declared himself gay. They said he was frequently taunted by other boys and had been involved in an argument with the alleged shooter, an eighth-grader who also was not named, and others Monday. During the lunchtime argument, one of the boys shouted at Tuesday’s victim, ‘You better watch your back,’ said one student who witnessed the encounter. Police said they had not determined a motive for the crime. Keith said investigators had also heard that the victim was gay but did not know whether that was true or whether it figured in the attack. They were sorting through several other possibilities as well, he said: ‘Which are true and which are rumor, we’re trying to figure out.'”

The student’s condition is reportedly critical, but improving.