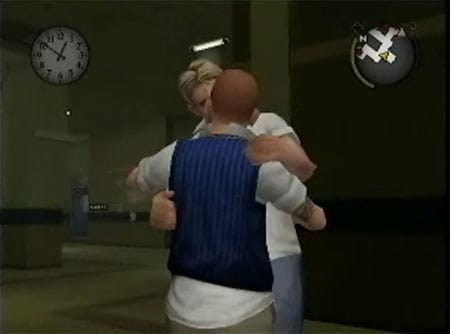 Rockstar’s “Bully” videogame received a lot of attention in 2006 when it was discovered that its main character, presumably homophobic bully Jimmy Hopkins (a difficult student with a delinquent record) could be made to kiss other male students. This, of course, played off of theories that the most homophobic among males were reacting to suppressed homosexual tendencies.

This got Christian conservatives really riled up. At the time, Christian watchdog Jack Thompson, known for his crusades against violence and obscenity in media, to condemn the game’s maker as well as Entertainment Software Review Board president Patricia Vance, to whom he wrote a letter that said: “Dear Ms. Vance, We just found gay sexual content in Bully, as Jimmy Hopkins makes out with another male student. Good luck with your ‘Teen’ rating now, Patty.”

Imagine how cranked Thompson will get now when he discovers that in the newest, enhanced “Scholarship Edition” of Bully, one of the eight new goals of the main character is to “receive 20 kisses from the gents,” earning him an “Over the Rainbow” achievement award.