The L.A. Weekly takes a look at Jeremy Bernard and Rufus Gifford, the gay SoCal-based couple who have raised millions of dollars for Barack Obama’s campaign: 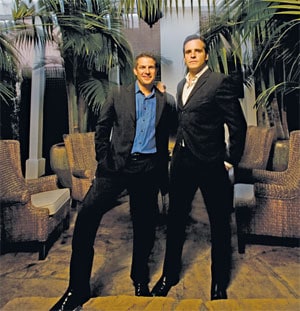 “Once the checks are rolling in, Bernard and Gifford then have the full attention of a congressional or presidential candidate, giving them the chance, behind the scenes, to promote their own political issues. It’s a level of access gays once only dreamed of, but they are living it. ‘Being gay makes you inherently political,’ says Gifford, comfortable with using his proximity to power to influence the candidate. ‘You see what’s right and what’s wrong, and you need to do something about it.’ Bernard and Gifford have very little, if anything, in common with the Old Gay approach typified by the Human Rights Campaign’s need for straight actresses to peddle an agenda. They are the new guard, or New Gays, who are more politically savvy. The New Gays cultivate, work with and fund gay political candidates. They withhold their talents and money from straight politicians who don’t follow through on their promises, while supporting those with what they view as a progay track record. And they never seek the straight world’s approval for their own gay existence. The New Gays understand their power in today’s political system, and they use it. And in this winter’s slog of primaries, they just might use it to propel a candidate toward the White House.”