Sacha Baron Cohen, who is in Kansas shooting his film Bruno, which centers around his gay Austrian news reporter character, has been terrorizing various locations around the state, including Wichita’s Mid-Continent Airport: 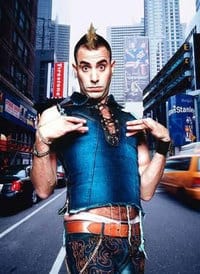 “Officials there are reviewing its media policies after the so-called German documentary film crew made a scene inside the main terminal on Friday. ‘We were lied to,’ says Assistant Airport Director Brad Christopher. ‘We were duped.’ Authorities say the film crew was not who they said they were. Last month, the group contacted Wichita airport officials about shooting part of their documentary on American culture at Mid-Continent. They arrived Friday and were shown around. Airport employees say they seemed professional. That is, until the cameras came on and the clothes came off. Witnesses say it almost looked like pornography. In the middle of the terminal, the film crew began stripping down. They were escorted out of the airport by police, and told to leave. Wichita Police, along with the Attorney General, are investigating the prank. Airport officials say it wasn’t necessarily illegal, but it was unethical and highly inappropriate for a public location where security is paramount.”

AFTER THE JUMP, a fairly old clip of ‘Bruno’ interviewing some wrestlers on Spring Break at Daytona Beach:

KAKE adds to the Kansas report: “Several locations in Kansas were targeted last week by a film crew claiming to be making a film about culture in America. Their actions have people across the state wondering whether they’ve been part of a ‘Borat’-like prank. Pastor Greg Smith of Central Community Church says they were contacted by the film crew and were told they were working on a film to be shown in Europe. Smith agreed to let them film the Easter play being performed at the church. However, at some point, fellow Pastor Clint Dunn knew something was not right. In security camera footage from the church, you can see crew members making preparations to cover the security cameras before attempting to pull off their prank. Smith says one of the crew members was dressed ‘biblically’ and covered with chains. He believes they were going to disrupt the play going on inside the church at the time. Dunn quickly took action to prevent that from happening. He locked the doors and abruptly told the audience good-bye.”